Tyler, Texas is only two hours away from us yet it seems like I am constantly being introduced to new things that draw parallels with our very own Shreveport-Bossier City. They have a growing downtown scene, some incredible food, and even a couple of breweries. And that’s what I’m here to talk about. Beers, breweries, Tyler.

One Saturday I went on a trip with several other media folks to see what the buzz was about. We visited two breweries: True Vine Brewing Co. and ETX Brewing Co. I was really excited because I’d never knowingly had anything from these breweries and I’m always one to try something new. So first stop was True Vine.

Based on appearance alone, True Vine is all about the beer. Their brewery looks like it was an old garage on an industrial strip. They’ve created a distinct “backyard” vibe with a stage for musical acts, picnic tables, and even have trees for you to hang your hammocks on. I immediately felt at home. I went in looking for the restroom, since I overly hydrated on the ride, and bumped into Ryan Dixon. He is a co-founder and a former home brewer turned pro. He seemed super excited to see us and was extremely welcoming. 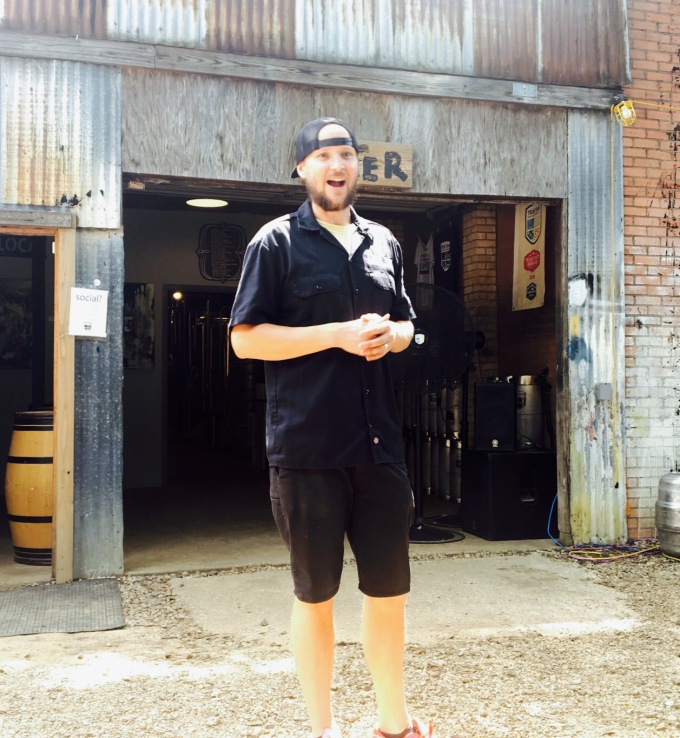 After we all got settled and had beer in our hands, we were treated to a delicious meal from Aspen Grill(also in Tyler). Each course was paired with a True Vine beer and a menu item regular available at Aspen Grill. My favorite beer, which happens to be East Texas’ favorite True Vine beer, was the Mermaids & Unicorns Mythical Blonde. It was a super crushable beer with low IBUs(20) that was clean, slightly citrusy with a little bit of yeast and honey on the nose. The pairing was A+ with the Pow-Wow Shrimp. 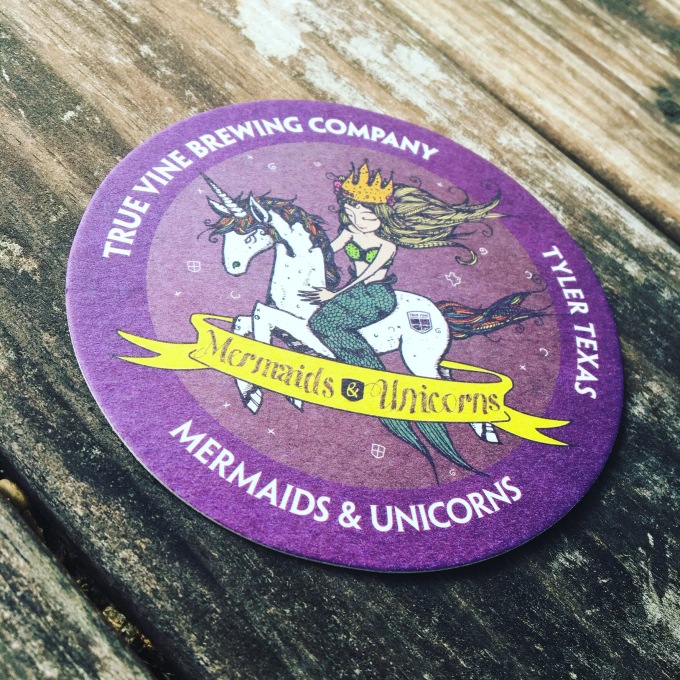 My other favorite beers were the Bon Hefe Wheat, the Round Table English Style Amber, and True Culture Oatmeal Porter. Bon Hefe is a great beer to introduce a non raft drinker to because its not hoppy or bitter. It’s slightly fruity, light bodied, and very clean. Round Table is a solid Amber. I say that because over the last couple years, I’ve had some really underwhelming amber or munich style beers. Round Table hit every flavor profile I was looking for and did it with grace. Caramel, toasty, and malty with a medium body. The True Culture is made by infusing cold brew coffee from neighbors Porch Culture Coffee. This is a fall seasonal brew that I highly suggest you snatching up when you see it. I know I’m going to make the drive to Tyler for a sixer once fall hits.

Over all, the crew at True Vine is really committed to “make Tyler a better place with craft beer.” You can tell that to be true because of Ryan’s passion and commitment to his craft. I really enjoyed my visit and am excited to go back.

Our second brewery stop was in downtown Tyler with ETX Brewing. As soon as we got there, you could tell there was a lot going on. A food truck was backing into some prime real estate in front of the brewery and there were people walking all over the side walks on our side of and the other side of the street. I’m already impressed with the downtown vibes.

The building is night and day different from True Vine. The building actually used to be a oil change place which I think creates a really great, causal vibe for it’s customers. There is a bar inside that serves as a filling station for everything they have available. It’s indoor seating is a hair larger than True Vine. 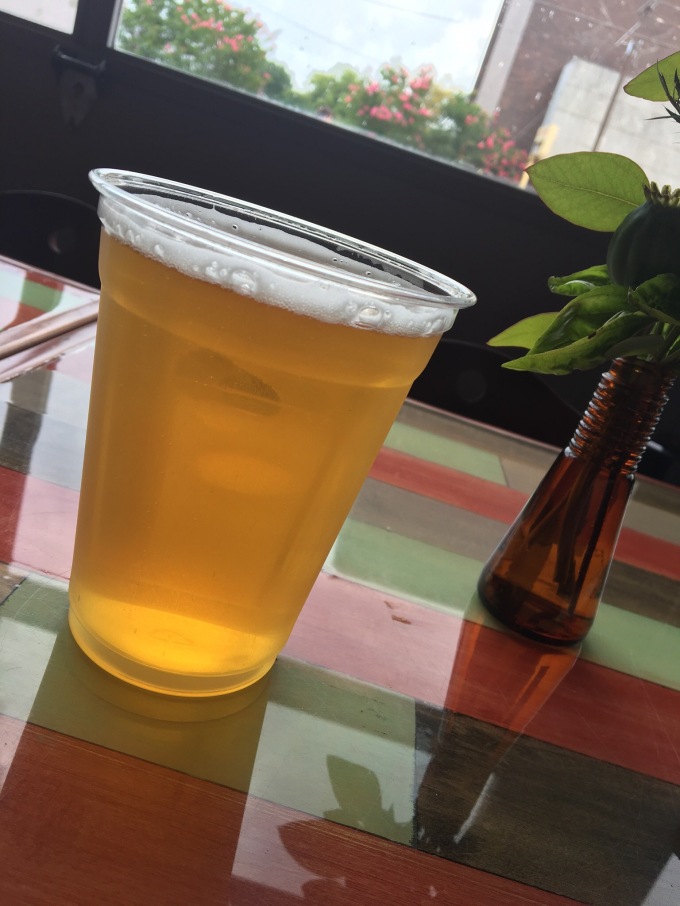 I was greeted upon arrival to ETX Brewing with a ice cold pint of Brickstreet Blonde.

Aside from the building, the beer right? ETX has an extensive line of brews that are available. Their flagships are Brickstreet Blonde, Hitching Post, 1847 IPA and Red House Wheat. With a lot of self imposed effort on staying ahead of the game and to always be creating, ETX brews a new beer each week. That is a commitment.

I got a flight of beers that I could choose. I landed on Brickstreet Blonde, the Double Dry Hopped Brickstreet, 1847 IPA, and Root Beer. I did say Root Beer. I was blown away by the consideration for families since children are allowed to be there. It says a lot to offer something like and to take the time to make it on site. Kudos to ETX for that. The Brickstreet Blonde(Flagship) was my favorite of the day. There were multiple versions of the Brickstreet(Passion Fruit infused as well as the 2x dry hopped mentioned earlier) on the menu meaning they are very happy with the recipe and enjoy playing with it. It is also their most popular beer.

The Brickstreet Blonde stood out to me from all the beers I had. Little citrus notes and a hop balance make this a great beer to drink while your figuring out what to drink next. Can’t go wrong with that.

There was a warm(not only from the 193 degree heat) vibe radiating from patrons and employees alike. You can see the downtown culture thriving in this building. Come to find out, the owners were the first business to commit to the downtown location and more business owners followed suit. Now, next to the brewery there is a pretty cool record shop, a boutique retail shop that sells local goods(cloths, artwork, soaps, etc.), and a coffee shop. There was even a trio of talented young musicians set up outside the record shop providing music for the whole block.

I think the culture that ETX has created with it’s beer is also mirrored in the downtown vibe. It’s only the beginning. Brian, co-owner and brewer) even says they haven’t gotten crazy with their beers because they are introducing people to craft beer everyday. This is a common tactic a lot of breweries use when people aren’t used to having a local brewery. Seasoned craft beer drinkers can get their fix and the brews will remain approachable to the novice.

Add these two breweries to what Keipersol Winery & Distillery is doing and you literally have something for everyone in Tyler, TX. Next time you’re in town swing by either place and have a pint.

I’d really like to take a second and thank both True Vine Brewing and ETX Brewing for their hospitality and their time. Great people and delicious beers. It’s always rejuvenating to meet people that are so passionate about something that you can hear it their voice. Also, a big thank you to Chris Jay with the Shreveport-Bossier Convention and Tourist Bureau and Holli Conley with Visit Tylershre for setting up this great trip.

Side note: It is incredible important for people to support local business but these are very important to actually go to their breweries and support. The breweries can’t sell packaged items on site. That means only pints to drink while you are there. This can be their life blood. Who knows, you may even meet some like minded folks or find out about a local charity, artist, or event that you could love. Get out there and drink some beer.